Our first daughter (Bubba G) was born on St Valentine’s day – the day of love; and our second daughter was born on the day of laughter – April Fool’s day (1/4/15). Both of their birthdays are special to us, and pretty easy to remember for our extended family.

When our second child was in utero, Bubba G (who is now three) called her Zaza or Zuzu (after the zebra twins in Peppa Pig. She even told her pre school teachers that I was having twins). I didn’t think that the creators of Peppa Pig would appreciate me using their character names in my little blog, so I will call her Zooey here. 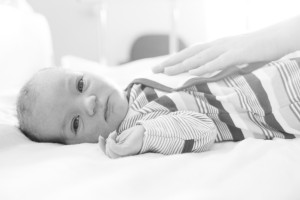 Bubba G had a tongue tie, which we picked up when she was eighteen months old, so we were wanting to have Zooey assessed as soon as possible after her birth. She was assessed by two paediatric interns in the hospital and they both said that she did not have a tongue tie, and that it would be dangerous to cut her frenum. The lactation consultant was more open minded and interested in this possibility though.

We listened respectfully to the paediatricians, however, given our family history (my husband had a significant tongue tie and was unable to breastfeed as a baby), that ties are a controversial subject, and that many paediatricians are not trained in this area, we wanted Zooey assessed by someone whose opinion we really trust. So at five days of age, we took her for a consult with our orofacial myologist Rochelle McPherson. Rochelle is highly trained in the diagnosis of tongue tie and she does not do the revisions herself, so she has no financial interest in the diagnosis.

She diagnosed Zooey with a tongue tie and with an upper lip tie, however, she said that the upper lip tie was not causing any restriction to Zooey’s upper lip and that it did not need revising. I was very happy to receive this advice, because I was planning on having it revised.

Rochelle recommended that we go and see Dr Angus Cameron at Sydney Specialist Tongue Tie clinic for a second opinion and for revision (if he agreed that it was necessary). Thankfully, Dr Cameron was able to fit us in as his last patient the day we went to see Rochelle. He agreed that Zooey had a tongue tie and that revision would be helpful in her case. He is conservative with treatment, and he will not revise unless function is affected. The two babies that he assessed before Zooey were not diagnosed with ties and after their consults, his lovely wife Linda (who is a trained midwife, lactation consultant and psychologist) worked with the mums on improving their latch. I really felt for both of these mammas, because I imagine that they were hoping that ties were the cause of their breastfeeding difficulties. However, it showed to me that Dr Cameron is a practitioner of integrity and that he will only revise if there is a tie that is causing functional problems.

Dr Cameron used a tiny amount of sugar water (as a gentle anaesthetic) and he revised using one snip with scissors. Zooey did not cry, was not distressed and there was no bleeding. Dr Cameron has developed his own technique. He uses a stainless steel instrument to stretch the tongue up, makes a small cut and then pulls the tongue up (along the line of the muscle). He prefers this method to laser revision because it does not cause any scaring. He said that laser revision can sometimes cause restriction due to scar tissue.

We had Bubba G’s tie lasered (this was before we had heard of Rochelle and before she had met Dr Cameron and learned about his technique). However, this is an evolving journey and with new information, we made different choices. There are a number of highly skilled practitioners who use laser and they also help many babies and Mums with ties and breastfeeding challenges, but we felt that Dr Cameron’s technique was the best choice for our baby.

Hi!!! Thanks for posting all useful info. Do you have any idea that will Medicare cover tie correction?

Apologies for my delayed response. It is best to check with your provider. I think it would only be covered by Medicare if the revision is done by a doctor. We paid for ours using private health insurance (our providers were dentists).

Amanda here the midwife from the RHW. good on you for taking charge. Great outcome. Well done
Nice story.
All the best. Good health
Amanda