Nutrition can be a very supportive complimentary medicine for mental health, however, it should always be used in conjunction with appropriate medical and psychological care. Make sure you consult a nutritionist or naturopath who specialises in mental health if you wish to use nutrients to improve your mood. Please do not self-prescribe (to avoid drug-nutrient interactions).

THE TRIAD OF HEALTH

This is the triad of health.

For optimal wellbeing, we need to have a balance of structural, biochemical and emotional health. In my work, I focus specifically on the biochemical and nutritional corner of the triad.

The nervous system is controlled at a cellular level by communication between cells. There are two main types of cellular signalling – electrical and chemical. Nutritionally, I focus on chemical transmission, which involves neurotransmitters.

If you have a look at the diagram below you can see that neurotransmission involves the release of neurotransmitters from one neuron, their movement through a synapse and subsequent attachment to receptors on another neuron. Everything in the body is constantly in motion, including our neurotransmitters and these chemicals directly influence the fluctuating emotions that we experience every day. 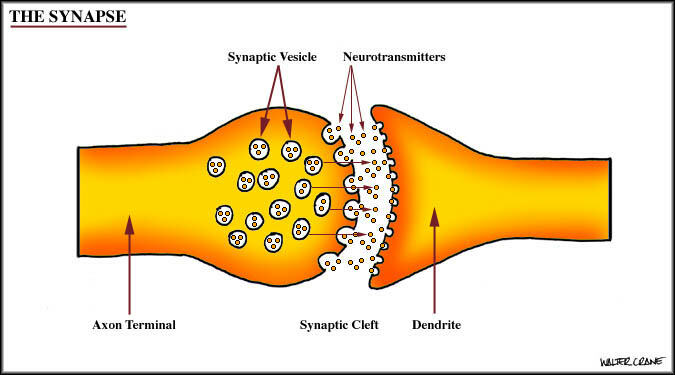 Let’s begin by talking about a very well known happiness neurotransmitter: serotonin. Serotonin assists in the regulation of mood, sleep and eating behaviours. The common signs and symptoms of serotonin deficiency include:

So how can you increase your serotonin levels?

To increase serotonin production, we need to ensure adequate intake of amino acids from protein (to ensure tryptophan intake), as well as the micronutrients pictured above. It is also possible to supplement with tryptophan or 5-hydroxytryptophan (5HTP) and other nutrients to boost serotonin production. It is important that drug/nutrient interactions are checked before prescribing nutrients that affect neurotransmitter levels, so it is best not to self-prescribe. For example, 5HTP needs to be avoided if you are taking SSRIs or St John’s wort and it is also contraindicated in pregnancy and breastfeeding.

Another very important happiness neurotransmitter is dopamine. It is needed for the control of movement, emotional response and the ability to experience pleasure and pain.

Signs and symptoms of dopamine deficiency include:

Dopamine is made out of the amino acid tyrosine and the cofactors needed for its production are shown in the diagram (NAD is made from B3). Again, ensuring adequate protein and micro-nutrients in the diet can contribute to dopamine production. There are also specific nutritional supplements, which can help to increase dopamine levels.

I help my patients to optimise neurotransmitter production by:

An example of how nutrients can improve an individual’s mental health is anorexia nervosa. Anti-depressants are ineffective in anorexia nervosa patients because they do not have an adequate intake of protein, vitamins and minerals to make serotonin. SSRI anti-depressants work by making the serotonin act longer in the synapse. However, optimal nutrition is essential to ensure that serotonin is being produced in the first place.

OTHER NEUROTRANSMITTERS INVOLVED IN MOOD

There are many other neurotransmitters involved in mood: 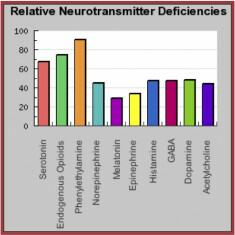 The graph above has been copied from an online survey created by Henry Osiecki. It is called the Mood Disorder Appraisal. It is a very effective tool for determining which neurotransmitters you may be deficient in. Once deficiencies have been identified, there are specific nutrient combinations that can be used to increase the levels of all the neurotransmitters represented in the graph. As I mentioned before, it can take up to three months to improve neurotransmitter balance, so you may need to take these supplements for this period of time or even for longer. This will be vary between individuals.

NAC is only just beginning to become available (via practitioner-only supplement companies). N-acetylcysteine (NAC) enhances intracellular synthesis of glutathione and has been shown to restore low glutathione levels. Glutathione is the most abundant and ubiquitous antioxidant in the body and is responsible for maintaining the oxidative balance within cells. There is good evidence for the effectiveness of NAC in Bipolar Disorder :

Deakin University medical researchers have found that an antioxidant, N-acetylcysteine (NAC), is an effective treatment for bipolar depression.

“The people in our trial experienced significantly lower levels of depression and reported higher levels of quality of life and general functioning,” said Dr Olivia Dean, a Deakin Medical School researcher based at Barwon Health in Geelong.

“There is currently no truly effective treatment for the depressive symptoms of bipolar disorder, with standard antidepressant medications having limited impact. Given the people in our trial had such positive results, and there are no major side-effects with NAC, it is a very promising option to be included with regular treatments. Larger trials are now needed to further test the benefits of NAC for people with bipolar depression. ”

Bipolar disorder affects up to two per cent of Australians. People with the disorder suffer severe mood swings that can go from feeling low (depressed) to feeling high (manic).

“The depressive phase, which happens most often, is the most lethal as it is during this time that people with the disorder are at highest risk of suicide,” Dr Dean explained.

“Given the stakes are so high it is imperative that we find effective treatments for the depressive phase of the disorder.”

The researchers are now planning a larger study to definitively confirm the findings from this study. They are also embarking on a new trial with NAC that involves children aged 3-10 years with autism as there are many biochemical similarities between bipolar disorder and autism. Parents who are interested in this study can contact Kristi Villagonzalo on (03) 5226 7428.

The results of the trial will be published in the Journal of Affective Disorders.

About the study and NAC:

149 people with bipolar disorder took 2000 mg per day of NAC along with their regular medications for eight weeks. On average, participants experienced a 46 per cent reduction in their depressive symptoms based on the Bipolar Depression Rating Scale.  Similarly, on a measure of quality of life and of general functioning, significant improvements were reported.

N-acetylcysteine (NAC) is an antioxidant most commonly used to clear mucus from airways and to treat paracetamoloverdose.

There are many ways that NAC could be working to improve the symptoms experienced by those with bipolar depression.

Oxidative stress, increased inflammation, changes in growth of nerve cells and alterations in signaling between nerve cells in the brain are all believed to play a role in bipolar disorder.  NAC has mechanisms that target all of these factors.  It is not entirely clear which of these mechanisms is responsible for improving mood symptoms, and further research is required to determine exactly how NAC works.

Magnesium is needed for neurotransmitter production and a deficiency can present with nervous system dysfunction including stress, aggressiveness, anxiety, poor concentration, headaches and even depression. A common sign of magnesium deficiency is muscle cramps. If you have muscle cramps, magnesium may help to alleviate them and may help to reduce some of these other symptoms as well.

Supplementation with magnesium also helps with:

I could not talk about nutrition for mental health without talking about fish oil because it is essential for optimal nervous system function. The active ingredients in fish oil are EPA and DHA.

EPA is anti-inflammatory, so it has a role in improving neurotransmission by reducing inflammation in the brain and in the gut where many of our neurotransmitters are produced.

It is important to ensure that the fish oils you take are high in EPA and DHA, that they are in the natural triglyceride form and that they are very low in impurities. I only recommend two practitioner only fish oils (Metagenics and Nordic Naturals).

It seems that a great percentage of the population have difficulties with their sleep. This is a challenge because sleep is fundamental to our health and happiness. Adequate sleep is essential for feeling good and to me nothing is more important than feeling good. Sleep is also essential for sustaining life and ensuring the survival of our species – this is a pretty important outcome of adequate sleep.

We need optimal sleep for:

Adenosine is the most effective natural medicine that I have come across for initiating sleep. It is the A out of ATP. It works by attaching to adenosine receptors in the brain and this causes drowsiness by slowing down nerve cell activity. It has a role in cognition, memory and in neuronal maturation and it can also help to prevent neuronal damage and degeneration. For example: in the event of a brain trauma such as stroke, adenosine can reduce the harmful effects of excess glutamate. However, it needs to be administered as soon as possible after the stroke to be effective. Henry Osiecki developed it specifically for his father after he suffered from a stroke.

Adenosine needs be taken sublingually so that it gets straight into the blood stream and can attach to receptors in the brain quickly. This is important because it only acts for 30 to 60 seconds. So you need to take it just as you are going to sleep. It also needs to be taken away from protein because other amino acids can compete with it. Adenosine is also very effective for anxiety and panic .Unfortunately it tastes like unpleasant chalk but it can be dipped in honey to improve compliance.

Glutamine (plus the co-factors activated B6, taurine and zinc) are very effective in helping to prolong sleep. These nutrients are particularly helpful for people who wake at 3 or 4 in the morning or who wake constantly throughout the night. I have even used pre-gaba successfully to help patients whose sleep is interrupted by vivid dreams. These nutrients work by increasing the production of GABA, which inhibits the firing of cells involved in wakefulness. Nutrients which increase GABA also helpful for the treatment of anxiety and panic attacks, but adenosine is more powerful in its effect.

Sunshine is also essential for optimal mood because it aids the conversion of tryptophan to serotonin via the pineal gland. In darkness tryptophan is converted into into melatonin. This is why it is essential to sleep in a very dark room. A sleep mask can also be helpful for improving sleep. In fact I had one patient who had trouble getting to sleep and staying asleep and all her sleep problems were alleviated when she installed blackout curtains in her bedroom. Early morning sunshine helps to promote melatonin production at night, which will help to improve sleep quality and quantity.

Sunshine is also essential for the production of vitamin D, which has a regulating effect on hormone production (in particular the sex hormones, which have an enormous effect on mood. Oestrogen boosts mood in women and testosterone boosts mood in men). Vitamin D also regulates calcium and this is needed for neurotransmitter release.

The latest research showed that it is important to get sunlight in the middle of the day for optimal vitamin D production. 5-15 minutes will be adequate depending on your skin colour (but make sure you avoid getting burnt).

Exercise is also essential for happiness.

Nutrition for mental health is complex and it is best to consult a practitioner who specialises in this area. Please do not self-prescribe to avoid drug-nutrient interactions.

With love and light